As part of impact assessments, it is essential to engage and have conversations with the people affected. So far, I had always managed to do so. Even under tough conditions in Afghanistan, Myanmar and Somalia, I had been able to sit down and properly talk with people experiencing the impact involved.

But not in Southern Italy. A distinct case. A rare context. We assessed the processed tomato chain. Preparatory steps had shown that tomato growers and processors in Italy were duly compliant with trade requirements, including social standards. Digging a bit deeper, we found that growers used a lot of manual field labour that was not accounted for. These unseen workers were predominantly undocumented migrants from Northern Africa driven by a dream of a better future in Europe. Yet, they got entangled in criminal networks making money on human trafficking and labour exploitation. We went into one of the ghettos where in this case mostly people of West-African origin lived (lived?). The place reminded me of smelling slums of Lagos, San Salvador and Dhaka. Yet, worse! Definitely worse! A place outside national rule of law. A place of filth, shacks, deprivation, violence, drugs and prostitution. A dead-end place of lost dreams and bygone hope for a better future. Within minutes we got threatened and thrown out. I had not been able to engage with anyone; I had not asked a single question. And we left with our heads full of questions! This is a clear case of criminal forces at play. We know it. We cannot deny it. If this is socially compliant, we need to move beyond compliance.

In Southern-Italy, it will not require rocket-science to connect existing data systems and verify how many workers are deployed for harvesting tomatoes and under what conditions. Enabling technologies are there. Also, the willingness to make a positive change is getting stronger and you may eventually pay a minimal price increase that will go barely noticed. The momentum is now to restore dignity to the lives of this group of undocumented people and reinstate their hope for a better future. 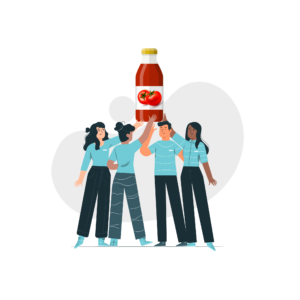